Can we have a Moratorium on Tickers?

Posted on September 30, 2011 by kaonalphageek 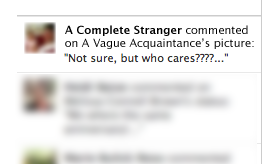 The recent uproar over the new Facebook Ticker has mostly focused on the weird second-degree nature of many of the updates.  To wit:  “Someone you’ve never heard of did something you don’t care about to someone you vaguely remember from High School.” And I agree that this is certainly creepy, but it really just emphasizes the kind of sharing Facebook has been doing all along (if you dug into that long lost vaguely familiar face’s wall comment threads, for example). So perhaps it’s for the best that this lack of privacy is highlighted.

The thing that bugs me about the ticker is that it is a ticker. That is, it is constantly being updated, to scroll new stuff in and old stuff out. That constant motion on the screen is an example of horrid user experience (UX) design, which I thought the modern web had moved beyond. Facebook might as well be using a blink tag up there. I can’t focus on the center column of text when there is motion in the right column.

In fact, every UX/UI designer knows that you can’t take your eyes off the moving stuff. And so do the UX/UI researchers:

Motion has a unique ability to attract attention over a large visual field and offers a rich graphical vocabulary. PDF

And Facebook isn’t alone. Several blogs and news sites have tickers these days, and the web developers are now using javascript and CSS to do the scrolling, so my Flash Blocker doesn’t keep them off my screen.

Often those blog tickers are lists of people who linked to the article I’m reading. News alert: I don’t care how popular you are, and I certainly don’t think you should be making it impossible for me to focus on your content by trumpeting how popular you are.

So my plea is simple: Let’s have a moratorium on tickers on the web. When your client comes to you and suggests you add a ticker to their web site, can you please just tell them NO? Tell them that the ticker will be distracting to their users, and will drive people away. Tell them that the age of the blink tag is over, and serious sites avoid unnecessary motion at all costs. Tell them that a ticker will make their site look amateurish (the same thing you told them when they asked for a hit counter).

Is everyone OK with that?

Tell us your thoughts Cancel reply